Has Anyone Ever Written Anything For You

“Probably, in my own way, this is probably my most intense song. What happened with this song is we were on the Wild Heart tour in 1984, or something like that. Joe Walsh was opening for me and we became friends and I was very uptight about something that was going on and I don’t even remember what it was now. But Joe felt it was important in the scheme of our lives to tell me a story that would make me rise above all of it. And, so we were in Denver, and we rented a Jeep and he drove me to Boulder and told me the story on the way of a little girl that was killed in an accident one morning on her way to nursery school – his little girl – in Boulder. And he drove me to this park and, I know he was going to show me something that was going to freak me out because I was already totally upset by the time we got to Boulder, and we walked across this park and there was this little silver drinking fountain and it said: “To Emma Kristen – for all those who can’t or aren’t big enough to get a drink.” Something about this story touched me so deeply that I went home to Phoenix. I got out of the car, walked into the front entry way where my piano is, and I sat down and wrote this song in about 5 minutes.”Stevie Nicks (421)

“Howard Stern in an interview with Joe Walsh states that Stevie Nicks told him that Joe was the love of her life [Stevie confirms this in a 2008 interview with Q magazine – Ed]. Howard asks Joe if Stevie wrote a song for him and Joe confirms it was “Has Anyone Ever Written Anything For You”.”Joe Walsh (211) 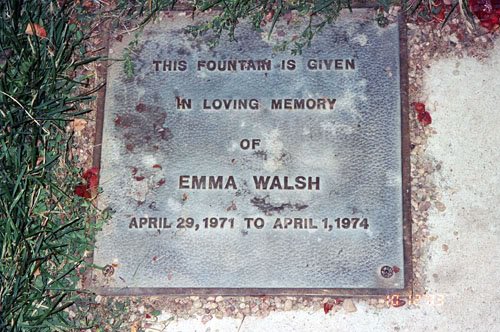 “I was in Australia, hanging out, doing something with some band and John Lennon died. So I was, of course, upset by this and I was very far away and it was very strange not being in the country when he died. I went home to Phoenix and I had this idea about writing a song about him, about the White Winged Dove which comes from Arizona and like nests in the Saguaro cactus but, like, I didn’t know that until I got to Phoenix and started writing and someone told me that. And then, to make a bad situation worse, my Uncle who was my Dad’s older brother, they were very close, was very sick and I went to visit him one day. My cousin, John, was there and for some reason nobody else was and my Uncle died. We didn’t even know what to do. It was like, “I can’t believe this is happening.” So when it says, “Well then suddenly, There was no one left standing, In the hall, yeah, yeah, In a flood of tears, That no one really ever heard fall at all, When I went searchin’ for an answer, Up the stairs and down the hall, Not to find an answer, Just to hear the call, Of a nightbird singin’,” that’s what that was about. That’s what the song’s about.”Stevie Nicks (421)

“Mabel was an amazing actress and comedian from the ’20s, and she was a terrible cocaine addict. She eventually died of tuberculosis, but it was really her drug addiction that killed her. She was in love with a famous director, who tried to get her off coke, and he was murdered. Rumor has it, drug dealers killed him. I saw a documentary of her in 1985, when I was at my lowest point with the blow. I was watching TV one night, the movie came on, and I really felt a connection with her. That’s when I wrote the song. Less than a year later, I went to rehab at Betty Ford.”Stevie Nicks (680)

“It’s a lecture Tom Petty gave me one day about something that was going on in my life. I’d asked him to write a song with me — this was about two months after I came out of rehab for [addiction to – Ed] Klonopin. I was still in a fragile state, after 48 days of hell in rehab. And Tom said, “You don’t need help to write a song. You just need to get over this experience that bummed you out so bad. The relationship you were in is over, it was over a long time ago, and you need to move on.” And I went home and wrote this song.”Stevie Nicks (680)